Pricing Forecast for the City of Vancouver Real Estate Market

Now that the property prices have come down in the City of Vancouver, how much further down will they go?

This is a question that a lot of my clients are asking, and you're probably asking as well. And this is why I have put together this market report, which is specific for the City of Vancouver.

In this report, I will be talking about how much the mortgage affordability has dropped by since the rise in interest rates. I'll talk about some of the pricing forecasts that have been circulating through the news. And I'll also talk about what we can expect with prices going forward for the Condo, Townhome, and Detached Home Markets on the East Side and the West Side of Vancouver.

Due to the recent rise in interest rates, the maximum amount of a mortgage that a buyer can qualify for has dropped by anywhere between 15% to 20% on average. Due to this drop in affordability, there has been a lot of pricing forecasts that have been circulating through the news. So how much of a price drop are these forecasts projecting? Let's take a look at a couple of the most recent ones.

The economist from Dejardins is predicting that home prices will decline across the country by 20% to 25% by next year, compared to where they peaked earlier this year. The economist from TD is projecting the same as well, and also adding that the declines will be steeper in BC and Ontario.

But there are a few things that you need to note about these forecasts.

One, they are referencing a large geographical area. Dejardins is referencing all of Canada and although TD has narrowed it down to BC, it's still not specific enough to be relied upon.

Two, these projections are talking about prices coming down from their peak, whereas some of the recent news headlines are making it seem like they'll be coming down by 25% from this point going forward.

In trying to answer that question, let's take a look back at a time not too long ago when we had a similar drop in mortgage affordability of between 15% to 20% and how that affected prices.

Back in 2018, the mortgage stress test was introduced which applied to all mortgages and still exists today. The goal of the stress test was to make sure that a buyer would be able to handle a rise in the interest rates by making them qualify at two percentage points higher than the mortgage rate that they were given.

This requirement caused the maximum amount of a mortgage that a buyer can qualify for to drop by 15% to 20% on average. This is very similar to the current drop in mortgage affordability that we're dealing with due to the interest rates rising by 2.25% over the last six months.

So how much did the prices come down by in the City of Vancouver for the Condo, Townhome, and Detached Home Markets after the stress test was introduced? 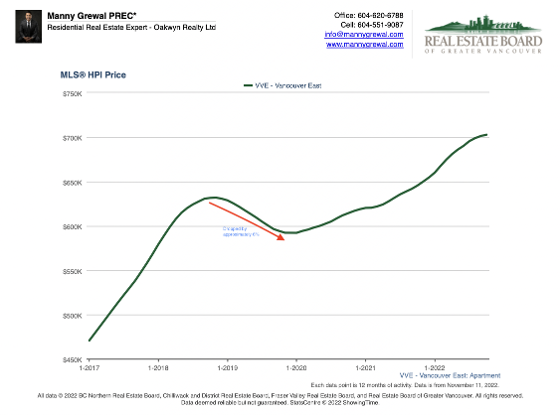 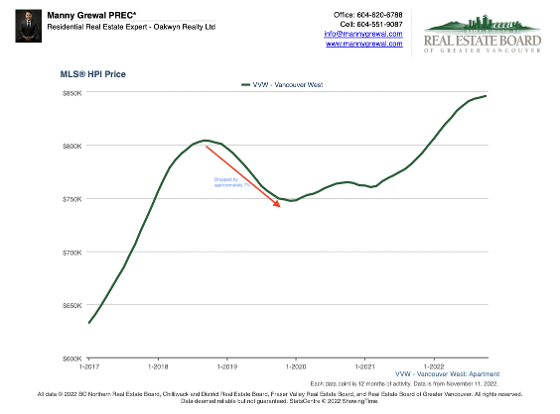 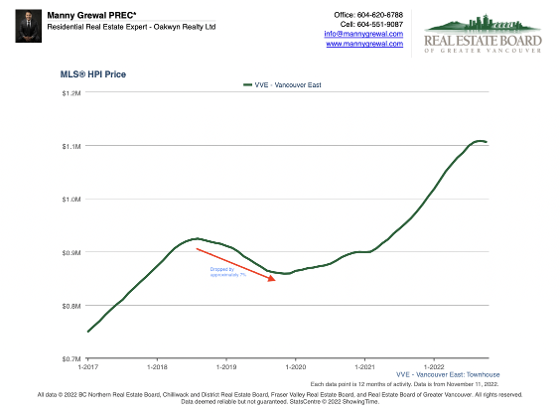 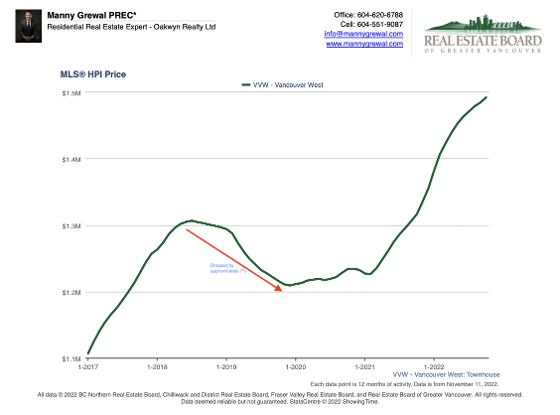 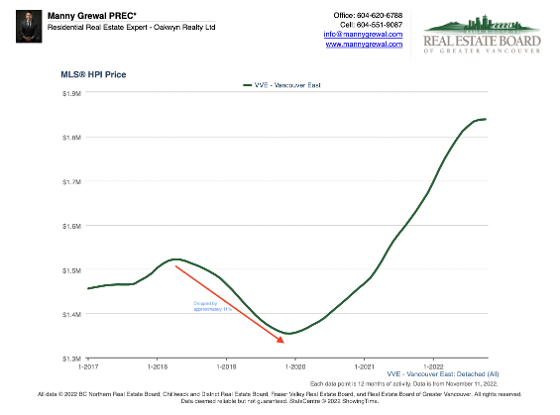 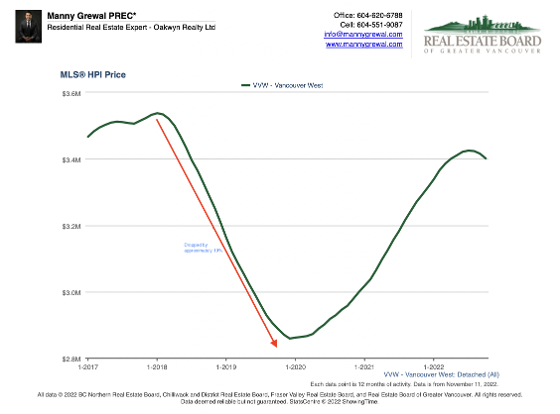 So why didn't most of the markets in the City of Vancouver come down in price by the same percentage as the drop in mortgage affordability?

There's a few reasons for why that didn't happen.

One, the number of new listings declined, which reduced the supply and reduced the impact of downward pressure on pricing.

Two, some of the buyers were able to make up for the drop in mortgage affordability by putting down more money, by either tapping into their savings or by getting help from their parents, or by doing a combination of both.

When it came to the detached homes market, the reason why the West Side was more effected than the East Side is because the West Side has higher price points and a few number of buyers to begin with. When mortgage affordability dropped, this number got reduced even further and thereby increasing the impact on pricing.

So what are my thoughts on pricing in the City of Vancouver going forward?

Well, in my opinion, since we are dealing with a mortgage affordability drop that is very similar to what we experienced in 2018, we should see similar effects on the Condo, Townhome and Detached Home Markets as we saw in 2018.

This is provided that the interest rates don't rise significantly going forward. Even if they do rise, I expect the pattern on pricing to remain the same as it was in 2018, meaning that even though the mortgage affordability will drop a little bit further, not all markets will come down by that same percentage.

Please keep in mind that there will be some properties that'll drop by less and some that will drop by more than what we saw in 2018. The property types and neighbourhoods that will be the most vulnerable to the biggest price drops are the ones that experienced the greatest price gains compared to the rest of the city.

We've already seen the prices come down, and since not all neighbourhoods and property types will come down equally, especially based on what we saw in 2018, I strongly suggest that you start monitoring the neighbourhoods and the areas that are the most important and the most relevant to you.

Be Market Wise. Monitor What Matters so that you can Make Informed Decisions.

if you would like to be kept up to date with the real estate market in the City of Vancouver as we continue to move through this transition, please click here.

If you would like to find out how much properties are selling for or what the inventory levels are like, in your areas of interest, please click here.

Or if you prefer, you can call me, you can text me, you can email me, I promise you that I'll provide you with an informative pressurefree conversation.

Thanks for reading and have a great day.

**Stats for this report were based on the rolling 12 months HPI data between the peak of 2018 to the trough of 2019, as of Sept 17, 2022. Data provided by the Real Estate Board of Greater Vancouver. Data deemed realiable but not guaranteed.

Interested in having an informative, pressure-free conversation about real estate?

The data relating to real estate on this website comes in part from the MLS® Reciprocity program of either the Real Estate Board of Greater Vancouver (REBGV), the Fraser Valley Real Estate Board (FVREB) or the Chilliwack and District Real Estate Board (CADREB). Real estate listings held by participating real estate firms are marked with the MLS® logo and detailed information about the listing includes the name of the listing agent. This representation is based in whole or part on data generated by either the REBGV, the FVREB or the CADREB which assumes no responsibility for its accuracy. The materials contained on this page may not be reproduced without the express written consent of either the REBGV, the FVREB or the CADREB.